I have two sons; 9 and 7 years old. My sister has two kids too. They are older than mine. Therefore I had the chance to observe and to generate a solution before having a problem. I wish!

To give an example, my niece and my nephew were always fighting to wash their hands first. My sister used to live in an apartment with only one bathroom. Imagine two kids fighting for the “lavatory”, for how many times in a day, lord only knows. Then I decided to have two lavatories in the bathroom by hook or by crook.

Fortunately, we have 2 bathrooms and a toilet now. One of the bathrooms is only for my sons’ use and has 2 lavatories. You know what? They still fight. Not for the “lavatory”, but for overstepping the “lavatory boundary”. For God’s sake!

Come on! We have other toilets too! Why specifically that one to pee? What is so special with it? Desperate about their fight I decided to make it in a fun way. I took a picture of them (separate pictures) having ants in their pants while they were waiting their turn to pee at the door. Then I put in a photo frame and hung it right on the opposite wall to the toilet.

Therefore the one in the toilet would empathize with the one waiting outside for his turn. It did work for a while. They had really fun to see their sibling’s silly photo. They took turns without fighting, respected each other and had fun… Then the war started again. 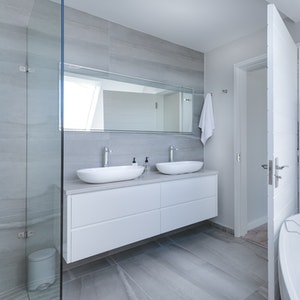 I don’t know where they got the idea but as a counterplan they wrote down “You Gotta Fight For Your Right to Potty” on a paper and framed it. Guess what? They hang it on the bathroom door. Now when they get to “this” door at the same time they just scream “Let the fight begin!” It took me a couple of days to find out a “counter” counterplan. If they’d like to fight then I’d fight. Not fight but fight…

I made up a story saying that the two other toilets were broken. So I needed to use theirs as well.

They had to say yes but asked me to fight as I expected. You know, when you are 9 or 7 seven years old, you can’t win a “fight” with your mum. And they didn’t. I feel guilty now cause I was horsing around while they were waiting out for their turn at the bathroom door. You can’t imagine (or you can) how they ran into the bathroom when I got out.

On the third day when I got out I found in a 24×36 frame their pictures together with this writing: “Mommy please. How long a minute depends on what side of the bathroom door you’re on!” I have my doubts that they got a hand from my husband. Their “ counter” counterplan did work too.

One thought on ““How Long A Minute Is” Depends…”