My boyfriend and I play a little game. Every Saturday we pick a restaurant, preferably a restaurant that offers a cuisine associated with a specific region, country or culture.

We order food just by telling the number on the menu display stands. After we eat , we try to cook exactly the same dish without looking at the recipe. Whoever cooks the food with a similar taste, wins the game for that week.

This Saturday, we went to an Italian restaurant. It was my turn to pick and cook for this week.

I was hoping to choose a pizza from the menu display stand. I was very hungry and I had seen a yummy slice of pizza ad on the way to the restaurant. After all, it was an Italian restaurant; the chances were that I picked either a pizza dish or a pasta dish, right? But no! I picked number 7, which was “Roman Style chicken”.

Well, it was delicious I must say. It was basically chicken breast and thighs in a tomato and garlic sauce. I could also taste prosciutto inside. 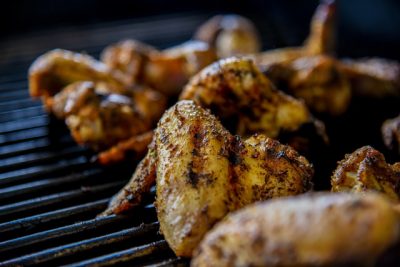 Anyway, here is how I cooked Roman Style Chicken back home in my own style. And my boyfriend had to admit it tasted quite the same.

I seasoned some chicken breasts and some thighs with 1/2 tsp salt and 1/2 tsp pepper, and cooked them until browned on both sides in a heavy, large frying pan, with heated olive oil.

I took the chicken away and added 1 red 1 yellow sliced pepper and prosciutto and cooked until the peppers had browned and the prosciutto was crisp.

I added the garlic and cooked for another minute. I added 3-4 chopped tomatoes, some white wine (which is my magic ingredient), and herbs. Then I returned the chicken to the pan, and brought the mixture to a boil. After they all boiled, I reduced the heat and covered the pan until the chicken was cooked through.

That was it. I garnished it with capers and parsley before I serve it. Originally there were no mushrooms but I think you can add mushrooms as well, it would taste good.

For those who are going to play the game, here is a trick for you ,so you ,don’t end up picking up chicken while you were starving for a pizza just like me. Have a look at the online menu before you go to the restaurant. They are usually the same as the menu stands! Sssh that is our little secret!